Hi shop owners, welcome to Car Count Daily. My name is Ron Ipach, and a lot of people in the industry call me Captain Car Count because that’s what I do. I specialize in flooding your shop with high-quality car count, and today I’m going to be talking about my favorite media to use in order to attract clients or brand new customers to your shop. Now, what is it?

Well, it’s good old direct mail, okay? This thing that shows up, you know that little mailbox you have outside your house that they keep stuffing things in? Well, that’s direct mail. What’s really great about direct mail these days is very few people are using it. Most people have abandoned it in favor of doing online advertising, and because most people are doing online, that’s why I prefer to go offline.

You don’t want to be where everybody else is, and if you probably noticed, the pile in your mail box, other than around Christmas time, is getting smaller and smaller and smaller which means there’s less competition for those eyeballs when somebody goes and picks up their mail.

Now I got this piece in the mail just yesterday, and I want to talk about this because I think it’s a very clever way to advertise. It could use a lot of work. I mean, there’s a lot of problems that I have with the marketing, but I’m going to touch the highlights so you get an idea of how to use direct mail properly so you get a lot of good business from that.

First and foremost, I love the size of this thing. This thing is ginormous. It’s much bigger than your standard piece of mail. Now, why is that important? Well, you want to stand out in the mailbox. If your letter that you’re sending looks like everything else, it’s the same shape and size and color of all the rest of the mail pieces in there, it’s going to get lost in the shuffle.

But when it’s huge like this or whether if it’s glossy or if it’s a different color or sometimes it’s lumpy and it’s got stuff inside, that really starts to attract some attention. So of course this attracted my attention because it was so darn big.

You May Also Like:  The Dirty Little 11 Letter Word

Another great thing that they did on this is they actually hand wrote my address on there. So somebody actually sat down and handwrote my address. Now, the problem with this also is they used on this side, they just did a return address from “Frisby Construction” so I know this is a business piece, as I probably would have figured that out because nobody sends things this large anyway, but they kind of blew it. They did such a great job by hand addressing it, but then they went ahead and blew it by just taking a stamp as the return address. But the great thing about this thing is it’s so darn big, it caught my attention, and believe it or not, it was the very first thing that I opened because I was wondering what the heck is this thing? This thing’s huge.

Now, another reason why people don’t like direct mail is because it’s expensive. A piece this size just to mail it, if you see, excuse me, if you see, it’s a buck 19 just to mail this thing. So it’s expensive. So you better do a good job. Now, I don’t have a problem spending a dollar 19 if they target the message the right way, and it’s a kick butt mailing piece which this goes maybe halfway, just because it’s so big.

Now the key is to get your mail opened because a lot of people sort their mail over a garbage can and they decide in an instant probably within two or three seconds whether they’re going to throw it away unopened, or they’re going to put it in another pile and open it. You want to be in that pile that they’re going to open it, so that’s number one key. Something this big gets opened because there’s just the simple curiosity factor of what’s going on here.

So when I open this thing up, I tell you, they did a great job and they did a lousy job on this. I’m just going to, again, point out the great things. Now this, it’s a very colorful piece. Now, this is a roofing company that sent this to me. Well, this is a very, very customized piece. On this side, it says everything about the company itself, but they actually have a picture of my house on it. Okay. So they went to the the Butler County auditor and took the picture, you can see that, they took the picture off the Butler County auditor site and put it on there. So it’s a one-off piece. I am the only one that got this one, which is kind of cool because it makes me realize this is for me because this is my house on there.

You May Also Like:  Auto Repair Online Review Karma

Granted, yeah, sometimes there might be a little bit of a creepiness factor in there, but for this job and for what they’re doing, I thought they did a really great job on it.

On the backside, they actually have the aerial view of my neighborhood, and they actually have the aerial view of my house, and they actually measured it out. It says I’ve got 6,400 square feet of roof on there, and then they actually give me a quote on here. So they actually gave me a price in advance. Now, granted, that’s not what you want to be doing because they’re selling strictly on price because they tell me that it’s $17,500 to do my roof and my competition’s going to change $38,000, which by the way, I know they charge $38,000 because I just had the roof replaced. So, I’m a bad customer to get this, and they didn’t realize got a new roof on there, and my roof isn’t green, by the way. I don’t know why it shows up on there.

But what’s great about this thing is it’s customized specifically for me. So if I happened to be in need of a roof, you better believe I’m going to give them a call because they’ve already done the work. They’ve given me the quote. They already did the measurements because, you know, I don’t know how they do the aerial photography on there to actually get the right measurements on there. I know that there’s a service out there that they can subscribe to get that done, but they did a good job in catching my attention, which is job number one. If you catch your client or your prospective client’s attention, it’s going to get open.

You May Also Like:  Mindset Tuesday - Why Do We Fail

Well, actually they did a fairly good job on it right here saying what they do and what their competitors don’t do. I don’t particularly care to have that kind of advertising because it’s all price-driven rather than quality-driven, but they did a good job in catching my attention. Again, that’s the number one thing.

So when you’re sending out your marketing piece to other people in the mail, first you gotta get them to open it. Then when they open it, it’s gotta be interesting. It’s gotta be right on point. It’s gotta speak their language, and heck, having a picture of my house on there, that spoke my language. It really caught my attention, and that’s how you get results with this. There’s a lot of other mail pieces that I’m going to be covering in future episodes. When I get them in the mailbox, I’ll show them to you, I’ll show what I like and what I don’t like about the, so that you can glean some really good ideas from it.

But direct mail, I love it. Everybody hates it because it’s expensive, it takes a lot of time, you gotta get things printed, it’s kind of a pain in the ass. That’s why you want to do it because that’s where your competitors are not. I’m not talking about the marriage mail pieces where there’s a whole magazine full of coupons or envelopes full of coupons. That’s not what I’m talking about when we talk about direct mail. I’m talking about you targeting your message to exactly who you want to attract to your shop with the right message and the right offer on there. When you get all of that right and you get them to open up that envelope, you’ve got a winning marketing piece. 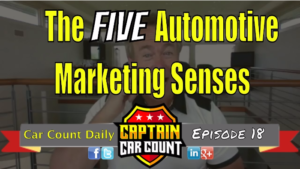 Using The 5 Senses To Improve Your Shops Customer Experience
Car Count Daily Hi, it's Ron Ipach, but you can…